Since China’s Arctic extension of the New Silk Road was first unveiled in a January 2018 white paper, a process of Arctic development has been unleashed which represents one of the most important and under-appreciated developments on Earth. Not only will 10 days be saved by goods moving between China and Europe via the Arctic route, but a new set of civilization building measures are now being unleashed in opposition to the anti-human degrowth program attempting to steer the world into a post-nation state system of de-growth and world government.

While NATO’s geopolitical unipolarists obsess over global governance and militarization of the Arctic, Eurasian Arctic policy has taken a very different character with an emphasis on economic development and cooperation.

Of course Russia has not neglected the military component of its northern military policy, but unlike the west which has no economic vision, Russia’s Arctic military posture is definitively defensive and principally diplomatic. As Foreign Minister Lavrov said at the end of last year’s Arctic Summit in Alaska: “Russia is doing and will do a lot to make sure the Arctic develops as a territory of peace, stability and cooperation.”

This conjunction of Russia and China’s northern policies around the Polar Silk Road should come as no surprise to anyone who has been paying attention to the close strategic friendship between both countries since the 2015 announcement of an alliance between the Russian-led Eurasian Economic Union and Belt and Road Initiative. This northern extension of the Maritime Silk Road represents a powerful force to transform the last unexplored frontier on the Earth, converting the Arctic from a geopolitical zone of conflict towards a new paradigm of mutual cooperation and development.

Putin gave a speech at a recent BRI forum stating:

“the Great Eurasian Partnership and Belt and Road concepts are both rooted in the principles and values that everyone understands: the natural aspiration of nations to live in peace and harmony, benefit from free access to the latest scientific achievements and innovative development, while preserving their culture and unique spiritual identity. In other words, we are united by our strategic, long-term interests.”

Weeks before this speech Russia unveiled a bold plan for Arctic development during the conference Arctic: Territory of Dialogue which has since grown in leaps and bounds. This bold plan ties to the “Great Eurasian Partnership”, not only extending roads, rail and new cities into the Far East, but also extending science and civilization into a terrain long thought totally inhospitable. One of the keystone projects driving this program involves the completion of the International North-South Transportation Corridor (INSTC) launched as an Indian-Iranian-Russian program in 2002 and which has been given new life in the last several years. 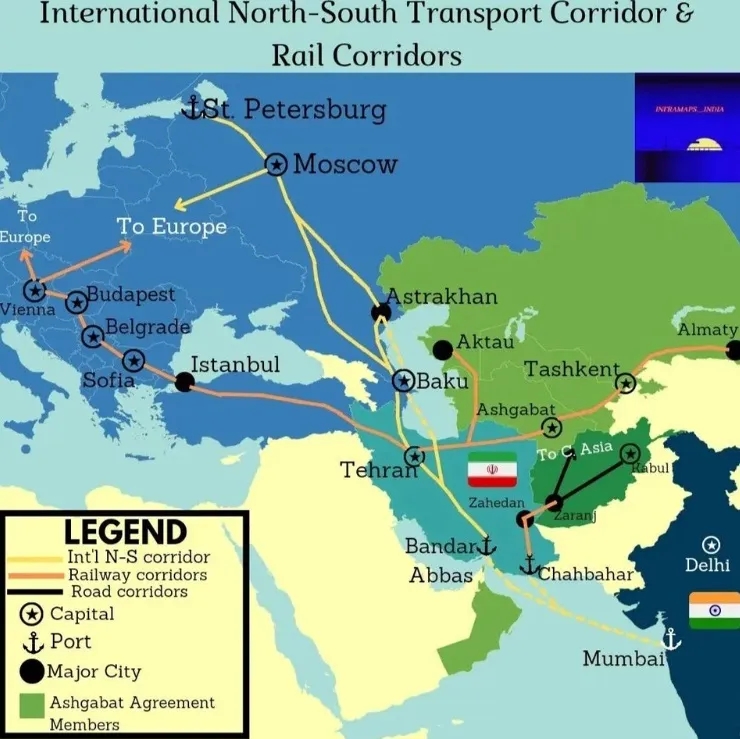 While the west has not built any new cities in several generations, Russia has announced the construction of five major Arctic cities supporting up to 1 million people each in the coming years with Russian Defense Minister Sergey Shoigu leading the plan. Reporting on this program Atle Staalesen wrote in Arctic Today:

“Shoigu sees his masterplan for Siberia as closely connected with the markets in nearby China. But the new cities will also be important for the development of the Arctic, he argues, and makes a reference to the famous 18th Century scientist and writer Mikhail Lomonosov who wrote that “Russian power will grow with Siberia and the Arctic Ocean, […]”. According to Shoigu, Lomonosov did not coincidently connect the Arctic and Siberia. “They should be developed together and not separately,” he underlines, and adds that “the focus on the development of the Siberian region is both timely and reasonable.”

Typically framed as an “anti-BRI” megaproject by small-minded geopoliticians, the INSTC and BRI are really two sides of the same program and should much rather be seen as a sister program for Eurasian, Southwest Asian and even African industrial growth. The INSTC currently enjoys the cooperation of 12 participating nations and has recently seen its northern extension moved from St Petersburg further north to the port of Lavna in Murmansk, Russia. China’s western “middle corridor” branch of the east-west BRI stretching through Xinjiang also features several rail and road corridors that tie directly into the INSTC not to mention the obvious Arctic far east connections.

When fully completed, the INSTC will not only circumvent the NATO-controlled zone of the mediteranean zone via the overly congested Suez canal but will cut approximately 10 days and 40% of the transportation costs off the current Suez route. 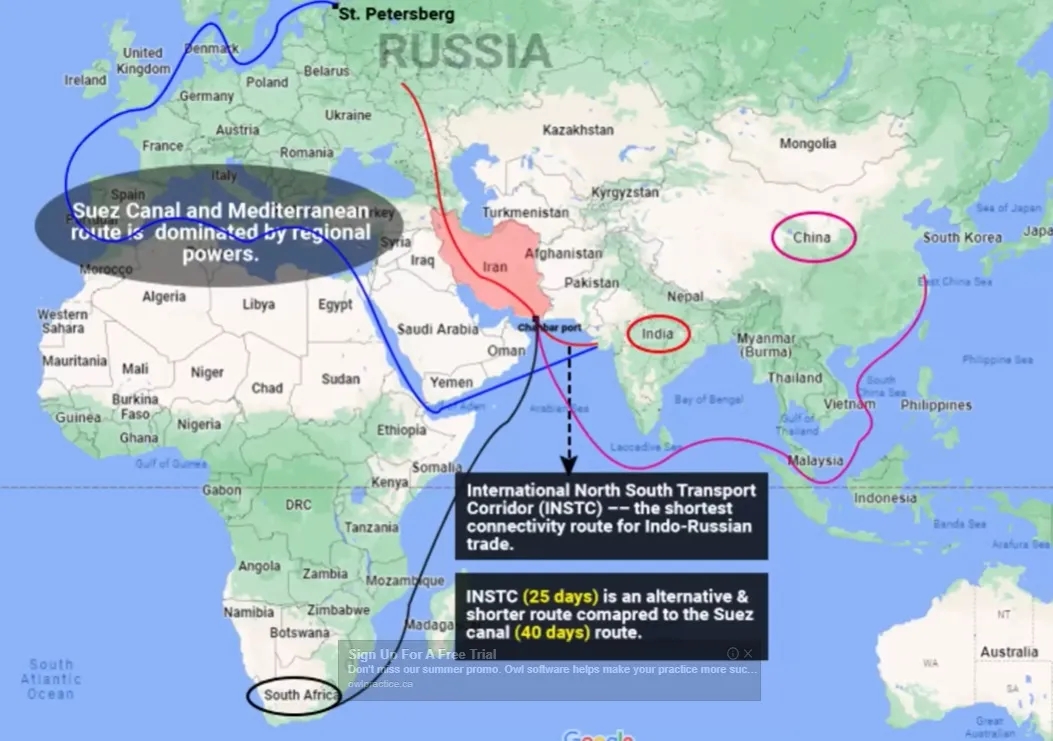 In 2019 China and Russia signed the first scientific cooperation agreement together setting up the “China-Russia Arctic Research Center” as a part of the Polar Silk Road.

The BRI’s Success So Far

The Belt and Road Initiative has already won over much of Africa as BRI-connected rail, ports, and other infrastructure are providing a breath of fresh air to nations long held hostage by IMF/World Bank conditionalities. 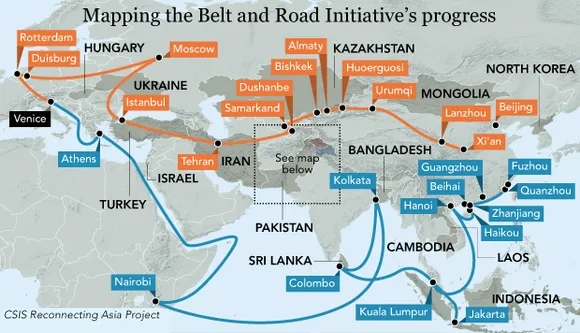 Pakistan and much of Southwest Asia are also increasingly on board the BRI through the growing China-Pakistan Economic Corridor. Twenty Arab states have signed onto the BRI and much of Latin America has also joined with hundreds of billions of dollars of infrastructure projects.

The Eurasian Economic Union is now in the final stages of a long planned economic treaty between China and the Russian-led economic block recently outlined by Putin advisor Sergey Glazyev.

Although both the USA and Canada have been invited to the BRI on many occasions since its 2013 inception, no positive response has been permitted by the NATO-Deep State power structures manipulating the west.

While China’s activity in the Arctic is only manifesting now, its Arctic Strategy began many years ago.

The importance of the Arctic Silk Road for China

China deployed their first Arctic research expedition in 1999, followed by the establishment of their first Arctic research station in Svalbard, Norway in 2004. After years of effort, China achieved a permanent observer seat at the Arctic Council in 2011, and began building icebreakers soon thereafter surpassing Canada and nearly surpassing the USA whose two out-dated ice breakers have passed their shelf life by many years.

As the Arctic ice caps continue to recede, the Northern Sea Route has become a major focus for China. The fact that shipping time from China’s Port of Dalian to Rotterdam would be cut by 10 days makes this alternative very attractive. Ships sailing from China to Europe must currently follow a transit through the congested Strait of Malacca and the Suez Canal which is 5000 nautical miles longer than the northern route. The opening up of Arctic resources vital for China’s long term outlook is also a major driver in this initiative.

In preparation for resource development, China and Russia created a Russian Chinese Polar Engineering and Research Center in 2016 to develop capabilities for northern development such as building on permafrost, creating ice resistant platforms, and more durable icebreakers. New technologies needed for enhanced ports, and transportation in the frigid cold was also a focus. China additionally has a 30% stake in the Yamal LNG Project and the ‘Power of Siberia’ 3000 mile Russia-China gas pipeline has become the primary supplier of China’s oil and natural gas needs since it began operations in 2019. 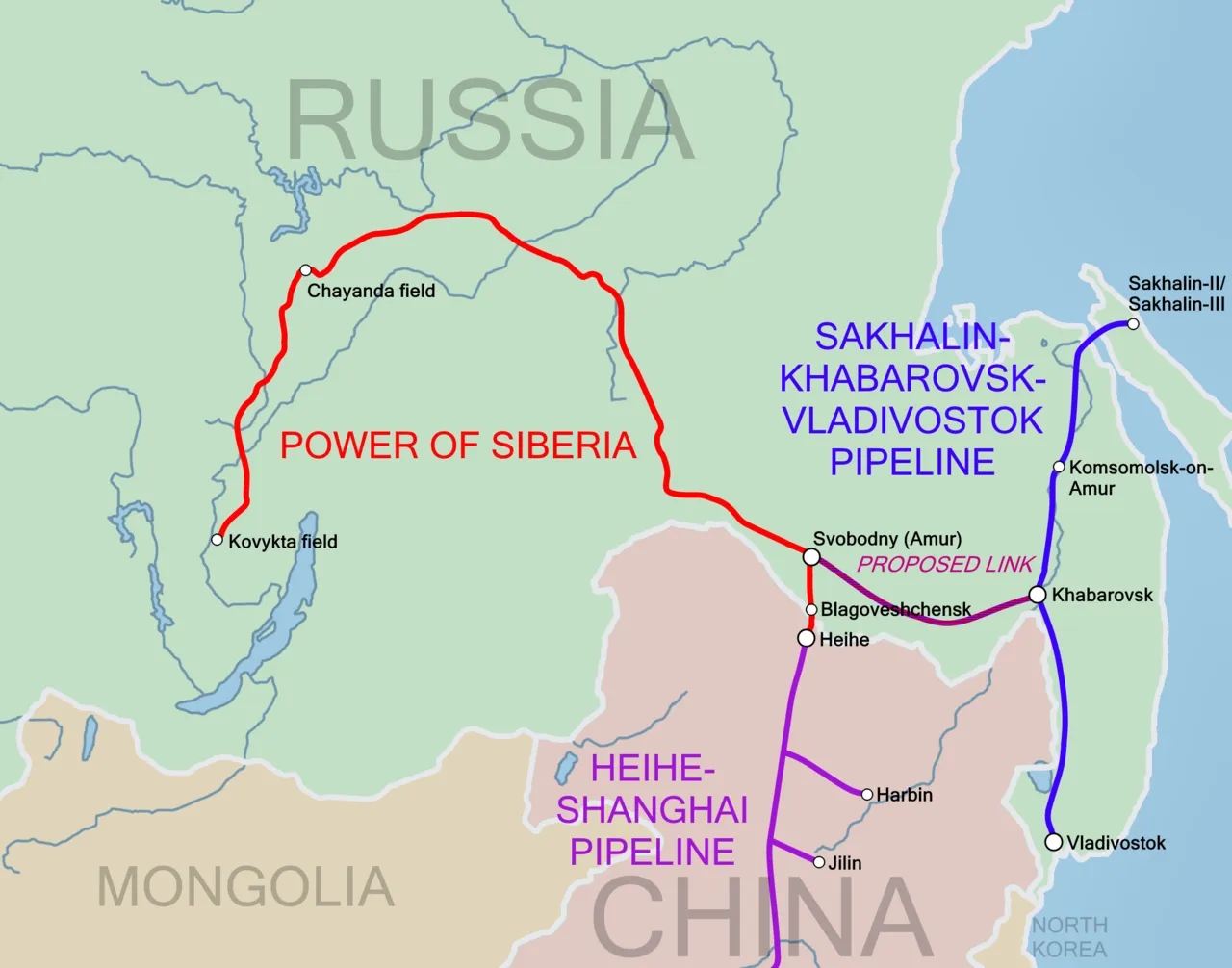 While western states race to shut down all hydrocarbon-based fuels in a suicidal race to de-carbonize, Russia and China have signed off on a 2600km Power of Siberia 2 which will not only satisfy China’s growth needs for the coming decades, but will easily compensate for the loss of gas sales to Europe as the iron curtain is erected once more. The Yamal Peninsula gas fields which supply the Power of Siberia 2 to China currently only service European needs which will soon change drastically.

Where the Belt Goes, the Road Follows

While the Belt and Road features two components (land and sea), the fact is that they are inextricably connected. Rails, ports and other civilization-building practices driven by a belief in scientific and technological progress have given this design a power and flexibility to adapt to every nation’s chosen developmental pathways. This is the mysterious “secret ingredient” to the BRI’s powerful adaptability which boggles the minds of closed-minded geopoliticians who can only think in zero-sum terms.

Scientific and technological progress, when shaped by the intention to uphold the common good represent UNIVERSAL requirements for human survival and satisfy a creative yearning at the deepest core of all people. Without this commitment to the continual improvement of productive powers of society and quality of life, a society will always be divided by the localized self interest of its parts fighting for their own short term benefits. Such has been the fate of the west as it embarked upon a consumer society driven by a “post-industrial mode of existence” after the assassinations of the 1960s and floating of the US dollar in 1971.

This concept of the common development of mankind both as a whole and in all of its parts was echoed recently by Xi Jinping who stated:

“China is ready to jointly promote the Belt and Road Initiative with international partners. We hope to create new drivers to power common development through this new platform of international cooperation; and we hope to turn it into a road of peace, prosperity, openness, green development and innovation and a road that brings together different civilizations.”

Over the past decade, the BRI has evolved from a loose, open concept in 2013 to the most ambitious endeavor in human history growing into three primary rail lines, thousands of miles of high speed rail, Arctic and space-based extensions, new industrial corridors, new modes of shaping education policy and especially new modes of executing banking activities unlike anything done in the west.

Of course, anti-BRI slanders increase with every passing day catering to mainstream normies who are led to believe that China is using “debt-trap diplomacy” or that Russia seeks global domination as soon as it conquers Ukraine.

in News
# Business Rotterdam
Sign in to leave a comment
Read Next
Chile top court ratifies closure of Canadian-owned Pascua Lama project
In 2018, Chilean authorities ordered the “total and definitive” closure of Pascua-Lama on their side of the border over environmental issues